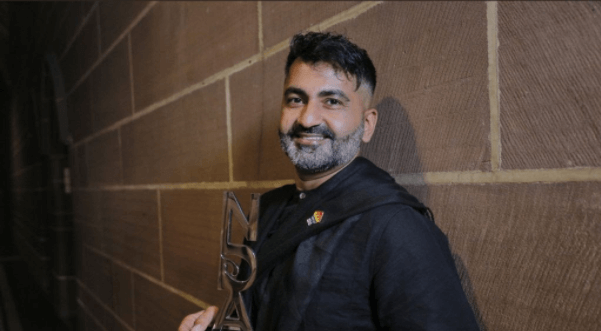 Laks Mann was the winner of the 2020 Avast Foundation-sponsored National Diversity Award for an LGBT Positive Role Model.

Laks Mann was the winner of the 2020 Avast Foundation-sponsored National Diversity Award for an LGBT Positive Role Model. A long-time grassroots activist, Laks is of South Asian heritage and grew up in a working-class environment, originally from Birmingham where he grew up in a working-class environment. He currently works as Met Police Officer, is Secretary of the National LGBT+ Police Intersectionality Group, and is also an EDI Advisor to the Mayor of London. Laks describes what happened when he won the award.

I just had a moment of euphoria if I'm honest, and hugged my friends sat at my table. Then walking up to the stage and you can see and hear your sponsor videos being played back on the two big screens either side. It was just an amazing feeling because I'm somebody who just gets on with doing the work. I do activism. I've never really courted much publicity or sought awards. I just get on doing the work, and so to be recognized by the National Diversity Awards was just amazing. And it's the most prestigious one, it really does count. People have reached out to me to say could you work with us? Could we work with you? Could you come and do a talk? Could we engage with you? Could you write a blog? I think the best thing for me has been the people that I've worked with all these years, who have actually said, it's about time.

And so, for you, it's acknowledgement and it's opened new avenues. How important do you think these awards are for acknowledging the positive achievements of the LGBT community generally?

They amplify everyday people, and they're not necessarily all about celebrities. It’s about recognizing the people that are sometimes unsung heroes, sometimes community champions, sometimes people that go to amazing lengths to do amazing things and may not necessarily be recognized by other awards because there's a bit more glitz and glamour and celebrity at play in some of the other awards. These awards are staying true to the core about shifting the dial on culture, diversity, having an impact and making sure that those people are recognized. So, I really am grateful that my award was sponsored by a diverse foundation, Avast, because it's really about grassroots people and it's people who stand on their own achievements as opposed to more of a PR exercise.

How supportive has Avast, as sponsor of the award, been?

They’ve been incredibly supportive. The Avast Foundation has contacted me since I met some people from the organization on the night itself. Shane Ryan was presenting the award and we had some great pictures taken backstage. And then since I've done a short interview with the Foundation as well, and they're sponsoring another award for the National Diversity Awards 2021, a community organization award this time. So, the Avast Foundation have been really supportive of the LGBTQ+community. It’s not a PR exercise, it's not a form of pinkwashing. I think with the Avast Foundation, they genuinely believe it. That's part of the National Diversity Awards, too. Everybody who is involved clearly is there because they want to be, because it's the right thing to do.

What advice would you give to anybody else thinking of submitting, for example, for the community awards or something else?

I think the advice I would give to people is don't hold back, because when you're doing activism, you're doing the work. Don’t feel too humble to accept your achievements and the recognition others give you. For me, going through the National Diversity Awards was about writing down what I had done and actually speaking about it and making it clear that I've done this, this and this, and I think for any organization or somebody who's putting themselves forward, don't sell yourself short. This is an opportunity to actually put everything in and to make sure that you are recognized for the work you've done, and the right people are boosting your nomination, and maybe some of them recording short videos to say why you should be the award winner. And you'll probably find that, when you ask people, they will be all too glad to come forward and assist.

So following this award, what is next for you Laks?

I think the next stage for me is to take it to more of a strategic level where I am sitting on a trustee governance board. I am a Mayor of London advisor. That's a really good platform because it's a public appointment and it's regional and it's London and it's the city I live in. So, it's taking it to the next stage and platforming it to national and, who knows, maybe international.

I would say I've earned my stripes. I've done community volunteering. I've rattled buckets. I've been out wearing yellow bibs and doing surveys and questionnaires and engaging with community members right through to coming up with projects, curating events, chairing events, creating whole programs for South Asian heritage month. For two years, I've curated the LGBTQ+ calendar of events and I’ve sat as part of steering groups and advisory groups and I’m now advising on national discussions. So, it's definitely moving to that level of overarching, strategic, seeing the big picture governance, where I think I can bring so much to the table.